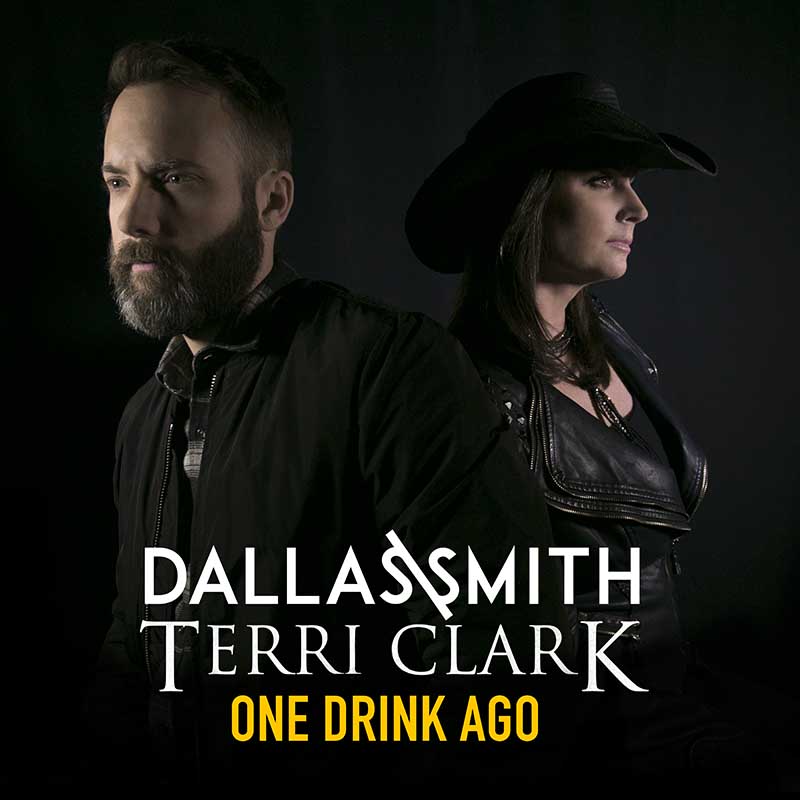 Toronto, ON (March 28, 2018) – Multi-platinum Country music superstars Dallas Smith and Terri Clark have teamed up to deliver the electrifying duet “One Drink Ago”, available at radio today and digitally March 30th via 604 Records. Clark, who holds the honour of being the only female Canadian member of the legendary Grand Ole Opry, has invited Smith to join her April 10th on the iconic stage for a special performance of the track.

Long-time friends and admirers of each other’s work, the multiple JUNO and CCMA Award winners joined forces on “One Drink Ago” merging their smooth vocals and seamless harmonies to tell a playful story about a night on the town, and the result of ‘what happens’ when you throw a little liquid courage into the mix.

On March 2nd Smith released “Acoustic Sessions Vol. 1” via 604 Records. The EP features six stripped back tracks from Smith’s various chart-topping releases including four of his #1 hits; “Autograph”, “Side Effects” and “Sky Stays This Blue” from the Top-Selling CCMA Award winning album “Side Effects” and “Wastin’ Gas” from the 2015 JUNO Award winning album “Lifted”. His latest video for the romantic single “50/50” features behind the scenes footage from his 2017 Side Effects Tour, which ushered in crowds in the thousands, notching 28 shows in 27 cities across the country and he is set to hit the road this summer for a handful of live festival dates including a headlining play at the Rockin’ River Musicfest in Merritt, BC and direct support slots at Big Valley Jamboree, Boots and Hearts Music Festival, Cavendish Beach Music Festival and Dauphin’s Countryfest.

With over 5 million albums sold, critically acclaimed international tours, and hit singles such as “Better Things To Do,” “Poor Poor Pitiful Me,” “Girls Lie Too,” “Northern Girl,” and “I Just Wanna Be Mad,” Clark has solidified her place in the history books of country music. She is a 3 time JUNO Award winner, has been named CCMA Female Vocalist of the Year five times and has taken home eight CCMA Fan’s Choice Awards. In total, she’s had the honour of receiving a whopping 19 CCMA Awards.

Her internationally syndicated radio show Country Gold with Terri Clark, which airs on more than 145 stations across the USA and Canada, debuted in 2016 and was recently recognized with a 2017 CMA Award nomination for National Broadcast Personality of the Year and a 2018 ACM Award nomination for National On-Air Personality of the Year. This past fall, Clark joined forces with Pam Tillis and Suzy Bogguss for the Chicks With Hits Tour – a guitar-pull style acoustic tour featuring chart-topping hits from three renowned women of country music and will be back out on the road again with them this year. She is currently in the studio working on a new album, which she’s expected to release later this year.

WATCH\LISTEN to Smith and Clark talk about the making of “One Drink Ago” here.

For a full list of upcoming tour dates and the latest information on Dallas Smith visit:

For a full list of upcoming tour dates and the latest information on Terri Clark please visit: