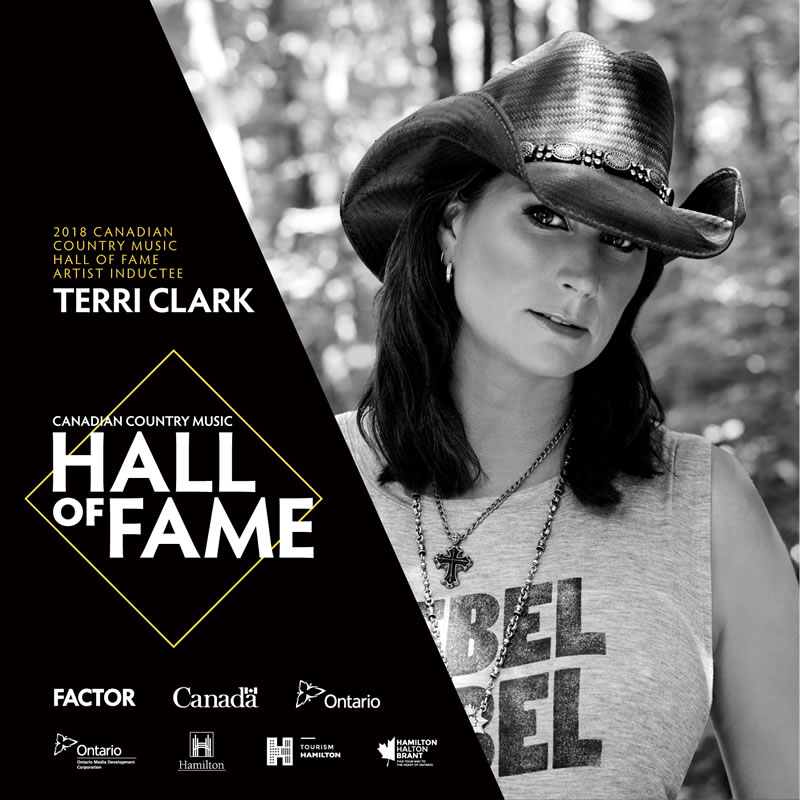 Today the Canadian Country Music Association (CCMA) announced 19-time CCMA Award and three-time JUNO Award Winner Terri Clark as the 2018 artist inductee to the Canadian Country Music Hall of Fame. Celebrated for her incredible contributions to Canadian country music, Clark will be honoured as a part of the CCMA Awards nationwide broadcast, from FirstOntario Centre in Hamilton, ON, on Sunday, September 9, live in all time zones on CBC and at cbcmusic.ca/ccmas at 8 p.m. ET (5 p.m. PT).

“It is such an honour to be inducted into the Canadian Country Music Hall of Fame,” said Terri Clark. “Being celebrated as one of Canada’s most influential country musicians is a recognition I do not take lightly and one I will forever be proud of. I am deeply grateful to everyone who has been on this journey with me, especially my fans who I had the opportunity to celebrate with today.”

5-time CCMA Female Artist of the Year,  Clark has definitely made her mark on country music. Beginning her career in Medicine Hat, this eight-time CCMA Award Fans’ Choice Award-winner released her debut album in 1995. Since then Clark has sold more than five million albums worldwide with hit records such as the self-titled TERRI CLARK, FEARLESS, HOW I FEEL and JUST THE SAME. The success of these records has earned Clark Gold, Platinum, Double Platinum and Triple Platinum status, leading her to become the first female Canadian member of the Grand Ole Opry.

“We are deeply proud of Terri and the career she has built for herself both here in Canada and internationally,” said Tracy Martin, President, CCMA. “Not only has Terri paved the way for countless artists, her contributions have also elevated Canadian country music on a world stage, allowing the genre to grow continuously across borderlines. We couldn’t be more appreciative of the work she has done and continues to do on behalf of Canadian country music. “

Currently on a headlining tour, Clark recently released “One Drink Ago,” a single with 4-time CCMA Award winner Dallas Smith. Produced by Joey Moi, Jamie Moore and Dave Cohen, the track has seen substantial success since its release, and is currently Top 10 and growing in popularity week after week.

Earning both ACM and CMA Award nominations (National On-Air Personality of the Year / National Broadcast personality of the Year) for her Westwood One radio show, Country Gold with Terri Clark, Clark has established herself as an all-around entertainer in the world of country music. Her tenacity has allowed her to become one of Canada’s most celebrated voices, laying the groundwork for her inevitable receipt of Canada’s most prestigious country honour.

Inductees of the Canadian Country Music Hall of Fame are chosen annually by a selected Hall of Fame Electors Committee, comprised of over seventy (70) industry peers. The three-stage voting process begins in January of each year.

About the Canadian Country Music Hall of Fame