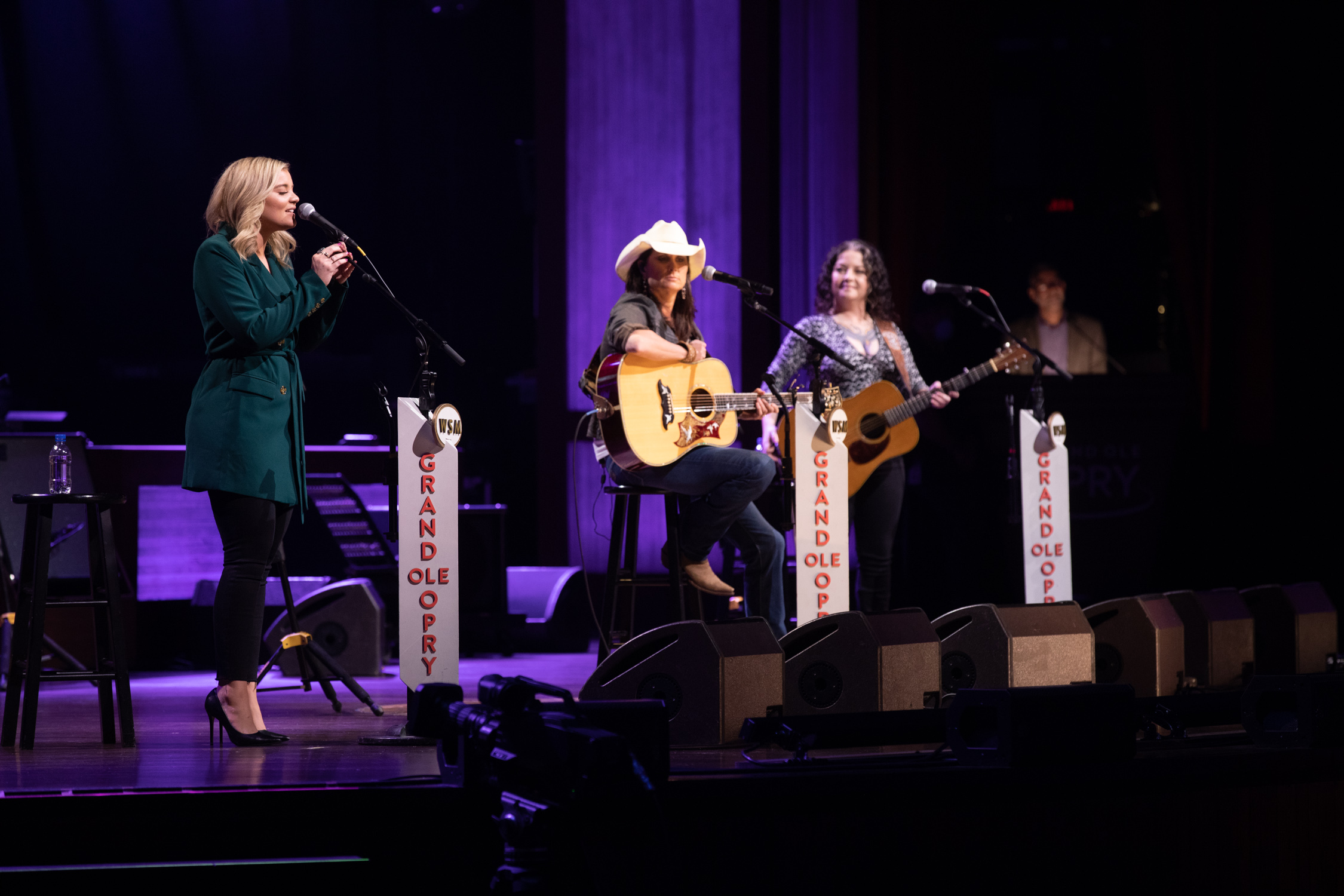 Clark, the host of tonight’s Opry, began by saying “It’s an unprecedented time in the world right now” before adding “…as tradition follows, we are going to keep going with the Opry and we are going to keep playing. We know these are tough times and have never seen anything like this in our lifetime. We are all so thrilled to be here.”

“Because we are honoring CDC rules we haven’t rehearsed a lot of this, so we were out in the parking lot 12 feet apart sitting on tailgates before we went on the air tonight,” laughed Clark before introducing Alaina. “Now that’s country. That’s the Opry.”

The three women kicked off the show with some of their own solo favorites before performing a medley of classic country female hits including “It Wasn’t God Who Made Honky Tonk Angels,” (Kitty Wells); “You Ain’t Woman Enough,” (Loretta Lynn); and “Walking After Midnight” (Patsy Cline). The three also joined forces on one of Diffie’s many hits, “John Deere Green.”

“Thank you all so much for being here with us tonight,” concluded Clark. “We love you. We’re going to get through this together. Stay strong. Stay mighty.”

Additionally, the Opry launched #UNBROKEN, a charitable campaign to raise money for the MusiCares COVID-19 Relief Fund. The fund will benefit artists and musicians struggling through the pandemic– some of the very people who write, make and create the music that has kept the music alive on the Opry stage for almost 95 years. Opry fans are invited to contribute to the fund by texting UNBROKEN to 41444.

The Grand Ole Opry was broadcast live on Circle, and on Gray TV stations, DISH Studio Channel 102, Sling TV and other TV affiliates in addition to a companion live stream on Circle’s Facebook and YouTube. TV and radio personality Bobby Bones hosted the Circle telecast, while Opry announcer Charlie Mattos joined the Opry’s radio audience at the announcer podium. Embracing today’s technology, the Opry was broadcast and streamed with a very small production team. The shows artists continue to perform acoustically at the recommended social distance across the Opry stage.

Fans around the world tuned in to the broadcast on the Opry’s flagship radio home, 650 AM-WSM and several other outlets.

With Nashvillians at home under Nashville Mayor John Cooper’s “STAY at Home” order and live shows paused at the Grand Ole Opry to help reduce the spread of COVID-19, this Saturday’s performance continued without a live audience. Grand Ole Opry management has worked closely with the Nashville’s Director of Health to bring the show live to millions around the world while following strict safety protocols under the guidance of local health professionals.

Millions of fans in dozens of countries around the world have tuned in live over the past four weeks to video stream or listen as the circle remained unbroken. Opry members Bill Anderson, Jeannie Seely and Connie Smith as well as Mandy Barnett, Michael Cleveland & Flamekeeper and Sam Williams took to the stage on March 14 as the Opry show went on the air without a live ticketed audience. On March 21 Opry members Vince Gill, Brad Paisley and Marty Stuart performed acoustically from the Opry House stage. Last Saturday March 28, Gill returned to the stage to perform acoustically with members of his family: wife Amy Grant and daughters Jenny Gill and Corrina Grant Gill.