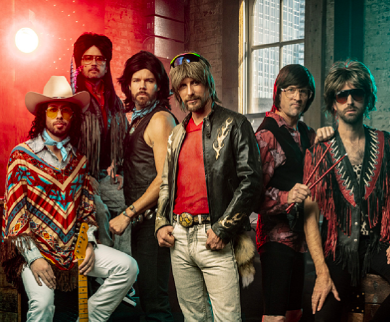 The Hot Country Knights’ upcoming debut record will feature some serious ’90s country star power. Not only does their debut single, “Pick Her Up,” include guest vocals from Travis Tritt, but, the band revealed during a press event in January, they’ve got a duet with Terri Clark up their sleeves, too.

“Can we tell people the good news? One Terry in the band was not enough,” joked fiddle / keytar player Terotej “Terry” Dvoraczekynski. “We have another Terri joining us, and her name is Terri Clark. Despite being Canadian, she has agreed to join the Hot Country Knights on a song — special romance ballad.”

The song, he explains, will show the Knights’ softer, more romantic side. “It’s called “You Make it Hard.” Uh, I don’t know why this is funny,” Dvoraczekynski continued, glaring at the titters coming from the press conference crowd. “It’s a very sensual song.”

Not only do the Knights have a sentimental side, adds frontman Douglas “Doug” Douglason, but, in fact, they’re the original ’90s balladeers.

“Tim [McGraw] and Faith [Hill] ripped us off,” Douglason proclaims. “We wrote all these beautiful hits back in the day, and Faith stole them, so we’re stealing some back. We started with the romantic ballads, with the edgy lyrics and sexy videos, but we just didn’t have any money for videos back then.”

Now that Dierks Bentley is behind the Knights as a producer, though, fans might finally be treated to those steamy, edgy video treatments the songs deserve. “You’ll see. We’re re-planning that as well,” Douglason hints.[/vc_column_text][/vc_column][/vc_row]